skip to main | skip to sidebar

Sisterlocks Convert
This blog will chart the progress of my sisterlocks journey (installed 29.07.2007) and may include random social pics here and there. Please be patient with my blog as I usually bulk update 3 months behind althougth sometimes this can change (next updates will be made around Christmas / New Year) Thanks for the comments and visiting. Peace and Blessings x

Camera - back with a new lens

Finally my camera lens has been replaced which means my pics should have a better quality again like they use to lol. Wooo
Posted by Sisterlocks Convert at 16:11 No comments:

What is in the bag?

Ok this is a really crap picture but I finally got hold of my Nappylocs tool. I ordered the micro and small size. Although I have used the Sisterlocks Clip tool up to this point, I felt my thumb was hurting too much and I was getting frustrated at having to clip each lock so have discontinued using it.

At first I attempted to use the microl size version but it kept slipping from my locks. So armed with a nutcracker (no pliers) and a cloth I covered the Nappylocs tool to protect the metal (as I saw in another blog) and began squeezing. It took a big squeeze to finally get the tool to stay on my locks. There are a few locks that I have to hold when pulling through the rotation to stop the lock slipping from the tool, but not many.

So you’re probably thinking what do I think of it, do I find it easier and quicker and does it hurt to use? The answer to that in a nutshell is excellent, yes, no. At first it took a while to get use to and I did have a bit of a disaster where I caught another lock and attached two locks by the thinnest piece of hair. Luckily my trusty Mum managed to unpick it for me. But unfortunately I did it for a second time at the front left of my head. This wasn’t because of the tool, but due to the fact that it took me a while to really get the feel of the tool. I still have two locks attached but just decided instead of splitting them to join them, so that’s my first two headed dragon in the making.

The time taken to retighten my hair was a week, I did put in some hours – the total I do not know but it was a longer process due to me being a bit slow, cautious and the fact that my last retightening I completed on my own was 23 March 2008 – so that makes 7 weeks 6 days of not retightening my hair. This wasn’t due to neglect, I just was busy with exams and thought it would do no harm. I did pay slightly as I do have some that have unravelled which I had to spend time redoing about 3 inches of hair.

I have learnt my lesson big time – I actually completed retightening on 22 May so that makes 6 days total. Next time I will do it every 3 weeks 4 max so I don’t start having second thoughts about my sisterlocks. I mean I did get slightly stressed and even had thoughts of braidlocks and combining alot of my hair, but then after I retightened my hair, flicked it a few times and took a few pics I knew that I would not go back.

On the left is the micro and on the right is the small size tool. 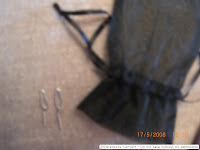 I had to take a pic of a lock at the front of my hair where my widows peak is – I believe this is the lock that is the nearest to fully locked out of them all.

Also the last pic shows that sometimes you just have to substitute: I spread a silk scarf over my pillow case to make a change from wearing a do-rag to bed. 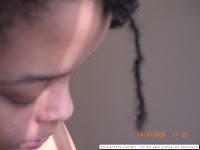 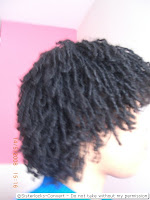 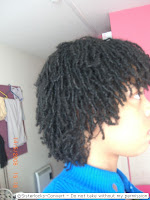 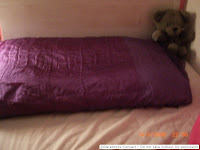 Posted by Sisterlocks Convert at 15:49 No comments:

Guess how many locks??

I have been tempted to count my locks before but just needed to be in that mood. So off I went parting and sectioning today and counted.

When my locks were originally installed I had 501, but as I lost 3 whilst learning to self-maintain (tugged a few etc) I am in the 400+ club.

This pic cracks me up. Can you guess if my face and eyes are facing the camera? 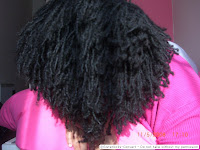 Answer: I'm not but I thought it looked like I was lol!
Posted by Sisterlocks Convert at 15:31 No comments:

Where there is sun, I will pull out my camera

As soon as I see the sun I fling back the curtains and start thinking and snapping pics of my hair. It must look weird to the students who pass by my window but I really do not care lol. Here are a few more texture shots, I really thought that my hair would have been nearly locked by now, but I guess the ends of my hair have other plans. Let them do their thing I say! 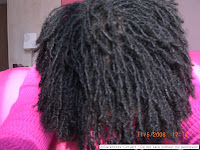 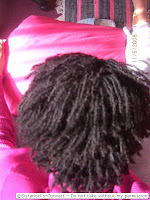 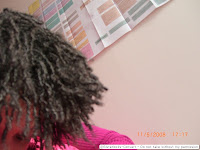 Posted by Sisterlocks Convert at 15:26 No comments: